Mavis Smith Award Guidelines
The Service Award resolution calls for nominations to be accepted from AHS members of Region 11 and for nominations to be solicited in the fall Regional Bulletin.
In accordance with that resolution, here are the rules for nominating someone for the Mavis Smith Service Award:
The nominator (that's you) must be an AHS member who lives in Region 11.
The nominee (that's the person to receive the award) must be an AHS member.
The nominee must live in Region 11.
The nominee must be living at the time of the nomination.
The nominee must not have received the Mavis Smith Service Award previously.
Only one person may be honored in anyone year; however, couples or families who have jointly served the Region may be jointly honored.
Nominations must include the name and address of the Region member being nominated, the name and address of the member submitting the nomination, and an explanation of why the nominated member is worthy of consideration for the Mavis Smith Service Award.
You must send the nomination to the chairperson of the Service Award Nominations Committee. For the 2020 award, the chairpersons are:
Steve and Jane Amy
611 Adam Dr.
Wamego, KS 66547
Additional committee members are Ann Large in Oklahoma - annlarge@cox.net and Patti Waterman in Missouri - waterman.patti@gmail.com
Nominations may be submitted electronically to adsregion11serviceawards@gmail.com 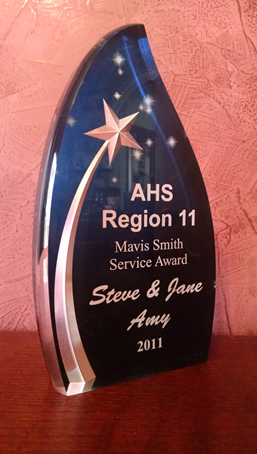